The arid chenopod shrublands of South Australia have been heavily degraded by sheep grazing since the 19th century. Acacia papyrocarpa is an ecologically important tree in these communities. It is habitat for many species of animals and plants which are not found in the open, it also plays an essential role in nutrient cycling and local hydrology. A. papyrocarpa is a very long lived tree – with some individuals possibly living as long as 1000 years – and recruitment occurs extremely slowly, depending on climate events which occur only a few times a century. Mainly due to grazing by sheep and rabbits, senescent trees are not being replaced by seedlings at a fast enough rate to maintain the population, and the tree and its associated ecosystems are threatened. We counted A. papyrocarpa, assigning individuals to one of nine age classes, and compared the age class distributions with a similar study which was carried out in 2000. This study appeared to show that these populations of A. papyrocarpa have begun to slowly recover. It is not clear what the cause of this recovery is – or even if such a recovery is, in fact, taking place – but, if it is, it may be related to reductions in the rabbit population due to the introduction of myxomatosis in the 1950s and calicivirus in the 1990s.

The chenopod shrublands of New South Wales, South Australia, and Western Australia are regions of low annual rainfall characterised by nutrient deficient soils, and vegetation dominated by shrubs of the family Chenopodiaceae. Several of these shrubs are important for sheep grazing and most of these lands in South Australia have been used for grazing since the 19th century. As a result, these ecosystems have been heavily degraded (Maconochie & Lay 1996, Office of Environment and Heritage 2014, School of Earth and Environmental Sciences 2014).

Acacia papyrocarpa is a slow growing tree which plays an important role in this ecosystem in South Australia (Aleman & Tiver 2008). It forms very open woodlands and is important as a habitat for many species of plants and animals which are not found in the open. Its role in nutrient cycling is likely to be of vital importance to the health of the ecosystems where it occurs. It probably also plays an important hydrological role in its environment, possibly through a mechanism of hydraulic lift (Ireland 1997, Facelli 2000).

Although the likely life span of this tree is about 500 years – and possibly as much as 1000 years (Ireland 1997) – recruitment into the population is very limited. In the area of this study at least, senescent trees are not being replaced by seedlings at a fast enough rate, if at all, and the species is under threat (Ireland 1997).

There are a number of factors that limit recruitment in this species. Although flowering is mostly sparse and inconsistent, A. papyrocarpa produce some seed every year, and occasionally they produce much larger amounts. These seeds rely on surface water flow to transport them away from the parent tree, to scarify the seed coat to enable germination, and to bury the seed in a safe place. Burial is essential to seed viability, as almost all seeds are removed by harvester ants unless they are buried in this way (Ireland & Andrew 1995, Ireland 1997). Once the seeds germinate, they then require higher than average moisture levels to allow them to grow to a stage where they can survive the usually dry conditions. The combination of heavy enough rain to create overland water flows at the right time of year, with follow-up rains or lower temperatures, occurs very infrequently – approximately once every 25 years (Ireland 1997).

This means that recruitment takes place only very rarely – there have, in fact, been only three major recruitment events in the last 100 years (Ireland 1997). However, since European colonization, these trees have been subject to a number of different influences which have reduced recruitment even further – and sometimes prevented it completely. Sheep grazing and rabbit infestations have been the major factors in this decline – A. papyrocarpa are grazed up to head height by sheep and rabbits, as well as by native herbivores. They have also been cut for timber and fence posts, which has had a significant impact on the population. Desiccation caused by climate change may also play a role in their decline (Ireland 1997).

In such a long lived tree, with such rare recruitment events, it is difficult to monitor changes in population structure over the limited time span of most scientific studies. However, the age class structures of A. papyrocarpa populations in three paddocks at Middleback Station in South Australia were recorded in 2000 by students at Adelaide University and we were able to repeat that study 14 years later to assess any changes that might have occurred. During that time, sheep grazing gradually ceased in those paddocks and, although complete de-stocking only occurred the previous year (Facelli, J.M. 2014 pers. comm.), it is possible that this may have had an effect on the age class distribution of these trees.

This study was carried out in three paddocks at Middleback station, near Whyalla, in the north east of the Eyre Peninsula in South Australia. This is a region of low annual rainfall, with an average of approximately 250 mm a year (Bailey & Turner 2003), most of which falls during winter. The study area has loamy red duplex or calcareous soils with very low nutrient levels (Reid & Lange 1988). The vegetation consists mainly of shrubs of the Chenopodiaceae family, with a sparse overstorey dominated by Acacia papyrocarpa and Myoporum platicarpum. A large proportion of the flora is made up of annual plants, although these plants occur mostly in the soil seed bank and only appear above ground when conditions are right (Reid & Lange 1988, School of Earth and Environmental Sciences 2014). This location was more fully described by Reid & Lange (1988).

The four study sites, Two Mile, Horseshoe, Overland, and Overland water point were grazed by sheep for approximately 100 years until the land was progressively de-stocked between 2009 and 2013. Two Mile and Horseshoe carried the same stock levels, but Overland was always slightly understocked as it was used for studies by the University of Adelaide (Facelli, J.M. 2014 pers. comm.). Overland water point is the piosphere around the water point in that paddock and consequently was heavily grazed and trampled.

The distribution of age classes of A. papyrocarpa in the paddocks we studied was previously recorded in 2000. We used the same method and age class classifications, to enable comparison between the two studies.

We walked transects spaced approximately 10 m apart, through the four study areas, and counted A. papyrocarpa, assigning individuals to one of nine age classes (seedlings to senescent trees) based on their morphology, as proposed by Ireland (1997). The age distributions counted were analysed, using chi-square tests, to compare the distributions in each paddock with the distributions found in the 2000 study. 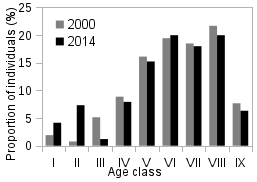 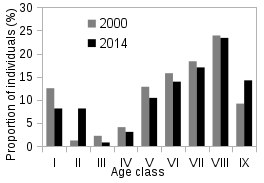 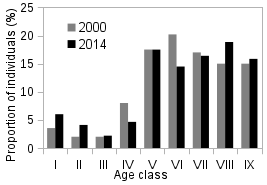 Fig 4. Age distribution of A. papyrocarpa at Overland water point in 2000 and 2014 (data: University of Adelaide) 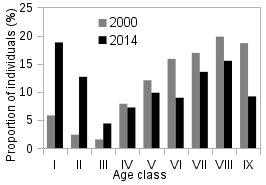 Fig 3. Age distribution of A. papyrocarpa at Overland in 2000 and 2014 (data: University of Adelaide) 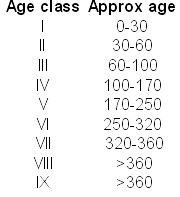 Table 1. Age classes of A. papyrocarpa, derived from dendrochronology (Ireland 1997)

It is also difficult to explain the large increase in the proportion of age class I trees at Overland from 6% to 19% over 14 years. This could be due to a general shift of the population along the age class scale – as must happen gradually – or high mortality at the older end of the scale, but Ireland (1997) estimated a minimum of 30 years between each age class, increasing with age (table 1), and reported very low mortality rates in senescent trees, so it seems unlikely that such a marked effect would be noticeable over less than half the period of the shortest age class. This may be an artefact of the data collection method.

In general, however, there appears to be an upward trend in the lower age classes, following an apparent low point at about age class III. Ireland’s (1997) estimation, based on dendrochronology, puts these trees at between 60 and 100 years old (table 1) – which approximately coincides with the arrival of rabbits at Middleback Station in the 1880s (Ireland, 1997). If this apparent trend accurately reflects reality, it suggests the A. papyrocarpa population may have entered a recovery phase. The beginning of this recovery appears to coincide roughly with the introduction of myxomatosis in the early 1950s (Kerr 2012) and the second stage of recovery – i.e., the increase in numbers of young trees apparent from this survey – roughly coincides with the introduction of calicivirus to the study area in 1995 (Bureau of Resource Sciences 1996).

The general reduction in the proportions of trees in the older age classes may be attributable to the increase in numbers of the younger age classes, or it could be due to the death of older trees. Ireland (1997) reported very low mortality rates in senescent trees, so it seems more likely to be an increase in younger trees than a decline in older ones. However, limitations of the present study method mean it is impossible to know which of these explanations is correct.

Lange and Graham (1983) concluded that rabbits had a significant impact on recruitment to Acacia populations in arid zones, and Ireland (1997) suggested that rabbits, not sheep, were the main cause of the decline in A. papyrocarpa recruitment. This gives a certain amount of weight to the suggestion that calicivirus may have contributed to the apparent recovery of recruitment in A. papyrocarpa. It is conceivable, also, that reduction and cessation of sheep grazing in the study area has had a beneficial effect on these trees, however, given their low growth rates, it seems unlikely that such an effect would be noticeable so soon. Further studies are needed to develop a clear picture of the causes of this recovery – and if, indeed, such a recovery is really taking place. Future studies on this site, however, may find that the introduction of calicivirus and the cessation of grazing are mutually confounding factors and it will be necessary to study other sites where grazing is continuing in order to understand the effects of those two factors here.